EUobserver have taken a leaf out of Euractiv‘s book and launched a blogging platform. It looks nice, but I’m not sure they’re going about it the right way. As I’ve written before, Blogactiv is a great resource, but I believe it could be even better if it was an aggregator that took in posts from blogs set up elsewhere rather than forcing bloggers to set up shop on the Blogactiv platform, as this no doubt alienates some bloggers (established ones in particular). EUobserver have actually gone one step further by having a by invitation only policy i.e. not even allowing people to set up a blog (unless it’s really well hidden – in which case, sorry EUobserver). This approach, plus the fact that they’re not doing anything differently from Blogactiv, I think will mean that their effort won’t take off.

Not convinced? Blogginportal.eu is an aggregator that pulls in material from blogs that in some way cover EU related affairs. It was set up in people’s spare time, it’s still in beta, and doesn’t get any traffic via established news portals like EUobserver and Euractiv. Nonetheless, it’s been linked 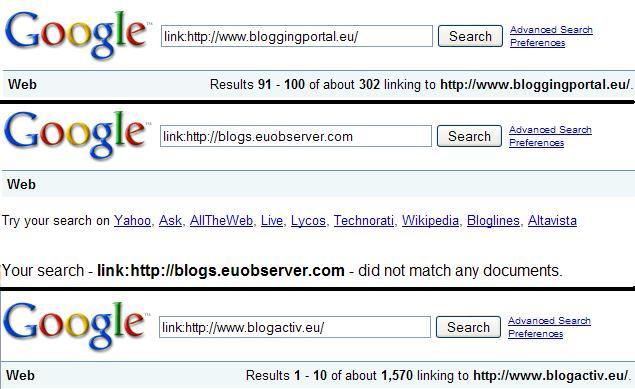 to 300+ times although it was launched less than a month ago (see left). EUoberserver has no link:tos yet (guess I may be first with this post – and credit, they’ve just started) and Blogactiv have managed just 1,570 in over a year.

Sure, links referring to a site isn’t a scientific measure of a site’s success, plus the bloggers whose own content is fed to blogginportal.eu (me included) will probably provide the bulk of links in the google search.

Nonetheless, I strongly believe that the aggregator approach will win hands down in the long run.

I am a partner at Rud Pedersen Public Affairs in Brussels, where I lead on strategic communications and campaigning. Here, I mostly write about the intersection of public affairs and communications.